Taken (with permission) from Crocuses In The Snow

Type in any of the following into Instagram: #fitspiration, #instafit and the much talked about #healthie and you’ll see the following things: flawless tanned abs, lithe tanned bodies in the crab pose, lycra clad no-sweat-off-my-back plankers and many more.

I know they are supposed to be inspirational and I am all for anything that encourages healthy, happy bodies.

But these images, for me, aren’t inspirational in the slightest. In fact, it’s the opposite. These images make me feel as though my fitness efforts aren’t enough, that because I’m not aiming for a six-pack or doing push-ups in the snow, I may as well give up and go home. They make me feel as if I met these people in real life they’d scoff at everything I achieve, eye my fleshy, still-a-bit-chubby body up and down and make me feel as though I am lying when I say I enjoy working out.

It made me realize that if these images make me feel this way now, three years after starting my own fitness journey, then how are they making those who are starting out now, as so many in January have? They could be online looking for inspiration and come away thinking that world isn’t for them, and give up. So I decided to write something on what fitness means to me, something for those who turn red as a tomato as soon as they step near a treadmill, people who fart in yoga class and for whom the plank means collapsing on your nose after two seconds.

I used to be as exercise hating as you get. An expert note forger, the girl who got her period four times a month or the one who left her kit behind: anything to get out of PE. And if forced, the one at the back of the running group, huffing and puffing, sobbing that she is going to die and, always, always picked last for teams. And bad PE lessons stay with you, they give you the idea that you are simply not one of those ‘fit’ people, so why even try? Leave it to the hockey captain, the 6-minute miler and use it to form bonds with those like you. “Go to the gym? Nah, let’s sit in and eat chocolate instead…” and yeah, living that way was so much fun. But then three reasons forced me out of my slippers and into my trainers:

1, I’ve never really got the whole “does my bum look big in this?” thing – my policy was always, “it’s behind me, why should I care?” I looked at myself straight on in the mirror and was fairly happy with what I saw. But then one day I made the dreaded mistake of looking at myself from behind wearing just a pair of pants. It was a shocking discovery. My bum DID look big in this but worse were the rolls of fat rippling down my back. I didn’t mind the bum (after all, a chubby bum is surely comfier to sit on?) but, I reasoned, the back was a problem: they really should be flat. Alas, my cider years were catching up with me: it was time to lose some weight.

2, I rewatched Titanic and looked at it totally differently. Rose would have had to be pretty fit to run up that boat while it was on such a steep angle and have good upper arm strength to hold onto those railings. If I was in the Titanic, or indeed any other disaster, I wouldn’t survive. I’d be the guy that let go and slid down the boat, thunking on that big metal thing (technical term I’m sure) on the way down.

3, (the main one) I began working for a slimming magazine. Part of my job was to attend fitness classes with health journalists. I once even had to go spinning with Victoria Pendleton. And there is nothing more humiliating than dying by the warm up, surrounded by those who write about fitness for a living. I had to try and match them, or at least get past the warm up.

In the process I learned a lot of ways to trick myself into thinking of myself as a gym person, of changing that voice in my head that told me I was still the fat, ginger kid writing notes with my right hand so that Mrs Sie wouldn’t recognize my handwriting. And here they are…

Thinking back to those school day sniggers I spent a lot of time worrying what others would think of me. When out running I’d avoid the nods of fellow runners, scared they’d judge me for how slow I was going. At the gym I wore muddy trainers so others would see me as a ‘serious exerciser’ and I was so ashamed of how red and sweaty I was at the end of classes. But as I went more often and my confidence improved I realized that it didn’t matter what time that person on Facebook got for their run, or if I can’t keep up with the Zumba moves. I was only against myself. I hate looking at myself in the mirror so I don’t: I look at the instructor and the others in class. And doing that makes me realize that everyone else in class is doing the same. They’re as caught up in their own heads as I am.

Sorry, what I really mean is, it’s not always fun. I got this idea in my head that if I found the right activity for me, the one I really enjoyed then exercise would be a doddle. And in a way that’s true – I would not work out if I couldn’t find enjoyment in any of it (which is why I left the yoga class where the instructor whistled at me like a dog) But this attitude left me shocked when, during hard bit of dance class or running up a hill, I found myself out of breath and gasping, and not enjoying this whole exercise malarkey at all. Then I remembered that I was overweight, hadn’t exercised in years and was throwing myself around the room like a mad man, using muscles that had, previously, been enjoying a lounging life. Of course at times it wasn’t going to be fun. But I began to adopt the attitude that if I didn’t enjoy that certain class or that workout then it was only 45 minutes of my life. And that was OK, it’s impossible to have fun all the time.

3, Mental tricks will get you through

The voice that tells me I’m not good enough, that I am not someone who enjoys working out is still there, daily. So I’ve had to adopt some tricks to drag myself to work out. These include: not going to the bathroom before the gym and not wearing a coat on my way there. That way I am forced to into the gym (which, conveniently is 5 minutes from my work) to relieve my aching bladder and get warm. Once I’m in there I remember, “oh yeah, it’s not so bad in here!” Before a class I’ll always, always arm myself with an excuse to get out of there early. It’s a treat to the old PE hating me. It says, “I won’t shout at you, or force you to do anything you don’t want to, you can do 20 minutes and if you hate it you have permission to leave.” I’ve not had to use one of my excuses once.

The most important piece of advice I’ve ever been given about working out is: “even an Olympic athlete should be red, sweaty and exhausted at the end of their workout. It shows you’ve given it your all. If you look good you aren’t working hard enough.”

So, to inspire you to not be intimidated by that fitness world, here are some real life #healthies… 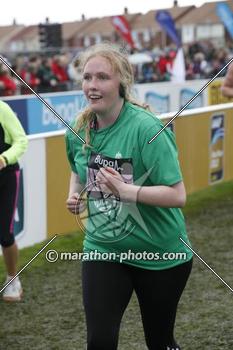